Malibu is an affluent beachfront city in northwestern Los Angeles County, California, United States. As of the 2010 census, the city population was 12,645. Malibu consists of a 21-mile (34 km)strip of prime Pacific coastline. Nicknamed "the 'Bu" by surfers and locals, the community is famous for its warm, sandy beaches, and for being the home of many Hollywood movie stars and others associated with the entertainment industry. Signs around the city proclaim "27 miles of scenic beauty", referring to Malibu's original length of 27 miles (43 km) before the city was incorporated in 1991.

Malibu was originally settled by the Chumash, Native Americans whose territory extended loosely from the San Joaquin Valley to San Luis Obispo to Malibu, as well as several islands off the southern coast of California. They named it "Humaliwo" or "the surf sounds loudly." The city's name derives from this, as the "Hu" syllable is not stressed. Spanish explorer Juan Cabrillo is believed to have moored at Malibu Lagoon, at the mouth of Malibu Creek, to obtain fresh water in 1542. The Spanish presence returned with the California mission system, and the area was part of Rancho Topanga Malibu Sequit — a 13,000-acre (53 km2) land grant — in 1802. That ranch passed intact to Frederick Hastings Rindge in 1891. He and his widow, Rhoda May Rindge, guarded their privacy zealously by hiring guards to evict all trespassers and fighting a lengthy court battle to prevent the building of a Southern Pacific railroad line. Few roads even entered the area before 1929, when the state won another court case and built what is now known as the Pacific Coast Highway. By then May Rindge was forced to subdivide her property and begin selling and leasing lots. The Rindge house, known as the Adamson House (a National Register of Historic Places site and California Historical Landmark), is now part of Malibu Creek State Park and is situated between Malibu Lagoon State Beach and Surfrider Beach, beside the Malibu Pier that was originally built for the family yacht.

In 1926, in an effort to avoid selling land to stave off insolvency, Rhoda May Rindge created a small ceramic tile factory. At its height, Malibu Potteries employed over 100 workers, and produced decorative tiles which furnish many Los Angeles-area public buildings and Beverly Hills residences. The factory, located one-half mile east of the pier, was ravaged by a fire in 1931. Although the factory partially reopened in 1932, it could not recover from the effects of the Great Depression and a steep downturn in Southern California construction projects. A distinct hybrid of Moorish and Arts and crafts designs, Malibu tile is considered highly collectible. Fine examples of the tiles may be seen at the Adamson House and Serra Retreat, a fifty-room mansion that was started in the 1920s as the main Rindge home on a hill overlooking the lagoon. The unfinished building was sold to the Franciscan Order in 1942 and is operated as a retreat facility, Serra Retreat. It burned in the 1970 fire and was rebuilt using many of the original tiles. Malibu Colony was one of the first areas inhabited after Malibu was opened to the public in 1929 and it is one of Malibu's most famous districts. It is located south of Malibu Road and the Pacific Coast Highway, west of Malibu Lagoon State Beach, and east of Malibu Bluffs Park (formerly a state park). Initially May Rindge kept control of Malibu Beach, allowing a few wealthy Hollywood stars to build vacation homes. Nearly a decade later, money woes forced Rindge to sell the land, and the Colony was born. Long known as a popular private enclave for wealthy celebrities, the Malibu Colony today is a gated community, with multi-million dollar homes on small lots. The Colony commands breathtaking views of the Pacific Ocean, affording a spectacular coastline view stretching from Santa Monica to Rancho Palos Verdes to the south (known locally as the Queen's Necklace) and the bluffs of Point Dume to the north.

High technology in Malibu: the first working model of a laser was demonstrated by Dr. Theodore Maiman in 1960 in Malibu at then Hughes Research Laboratory (now known as HRL Laboratories LLC). In the 1990s HRL Laboratories developed the FastScat computer code, for frequency domain algorithms and implementation, recognized as perhaps the most accurate code in the world for radar cross-section calculations. TRW built a laboratory in Solstice Canyon without any structural steel to test magnetic detectors for satellites and medical devices.

Incorporation: in 1991 most of the old Malibu land grant was incorporated as a city to allow local control of the area (as cities, unlike townships, are not subject to the same level of county government oversight). Prior to achieving municipal status, the local residents had fought several county-proposed developments, including an offshore freeway, a nuclear power plant, and several plans to replace septic tanks with sewer lines. The incorporation drive gained impetus in 1986, when the Los Angeles County Board of Supervisors approved plans for a regional sewer that would have been large enough to serve 400,000 people in the western Santa Monica Mountains. Residents were incensed that they would be assessed taxes and fees to pay for the oversized sewer project, and feared that the already-capacity Pacific Coast Highway would need to be widened into a freeway to accommodate growth that they did not want. The Supervisors fought the incorporation drive and prevented the residents from voting, a decision that was overturned in courts. The city councils that were elected in the 1990s were unable to write a Local Coastal Plan (LCP) that preserved enough public access to satisfy the California Coastal Commission, as required by the California Coastal Act. The state Legislature eventually passed a Malibu-specific law that allowed the Coastal Commission to write an LCP for Malibu, thus neutering the city's ability to control many aspects of land use. Because of the failure to adequately address sewage disposal problems in the heart of the city, the local water board ordered Malibu in November 2009 to build a sewage plant for the Civic Center area. The city council has objected to that solution. 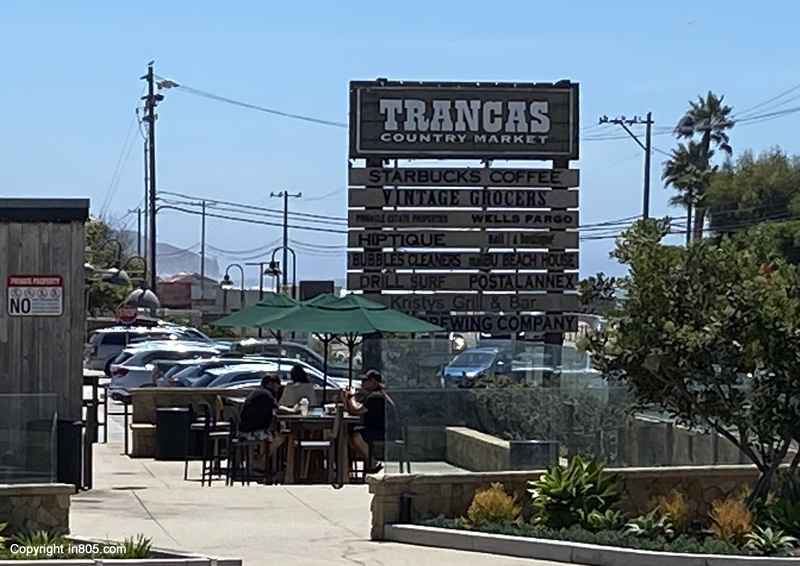 According to the United States Census Bureau, the city has a total area of 19.8 square miles (51 km2), over 99% of it land. Malibu's dry brush and steep clay slopes make it prone to fires, floods, and mudslides. Poor grading practices and over-irrigation or leaking pipes exacerbate the tendency for landslides. 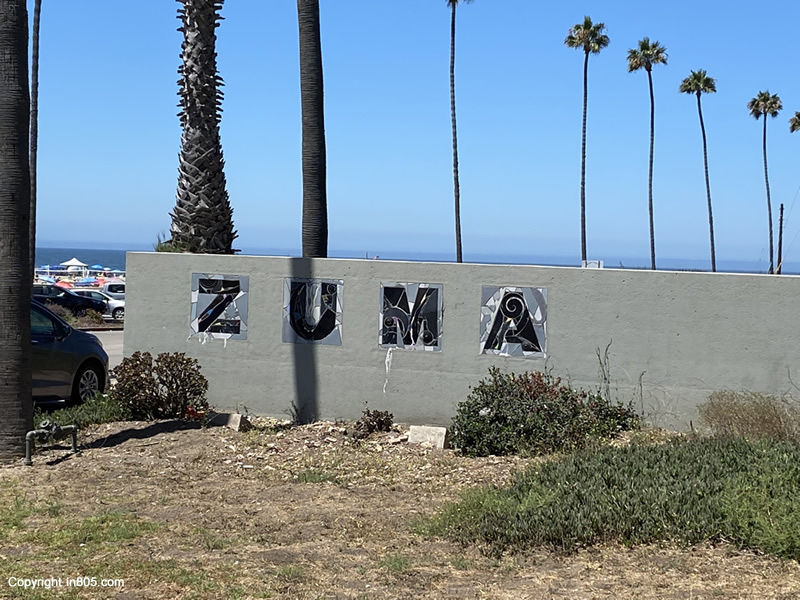 Carbon Beach, Paradise Cove, Escondido Beach, Surfrider Beach, Broad Beach, Pirate's Cove, Westward Beach, Zuma Beach, and Trancas are places along the coast in Malibu. Point Dume forms the northern end of the Santa Monica Bay, and Point Dume Headlands Park affords a vista of stretching to the Palos Verdes Peninsula and Santa Catalina Island. Directly below the park, on the western side of the point, is Pirates Cove, named for rum-runners during Prohibition who liked the secluded beach for offloading their cargo. Because of its relative seclusion, Pirate's Cove was previously used as a nude beach, but since nudity is now illegal on all beaches in Los Angeles County, nude sunbathers are subject to fines and/or arrest. On the eastern side of the point is "Little Dume", a surf spot which is accessible only by an unmarked trail below Wildlife Drive which has a locked gate. Surfers often paddle out from Paradise Cove to the area when the waves are breaking.

Like all California beaches, Malibu beaches are technically public land below the mean high tide line. Many large public beaches (Zuma Beach, Surfrider Beach) are easily accessible, but such access is sometimes limited to some of the smaller and more remote beaches. Some Malibu beaches are private, such as Paradise Cove, which charges an entrance fee to keep the crowds at bay. Although access to most all Malibu beaches can be obtained after a bit of a walk, the issue of expanded public access is continuously addressed and debated by the City. Many Malibu homeowners favor limited public access expansions to some beaches, claiming that many visitors are less likely than residents to respect the beaches or private property. 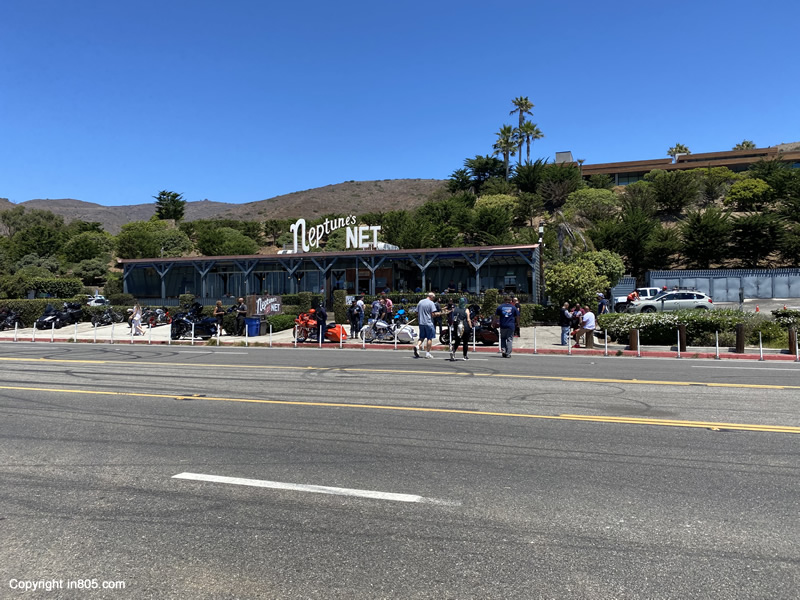 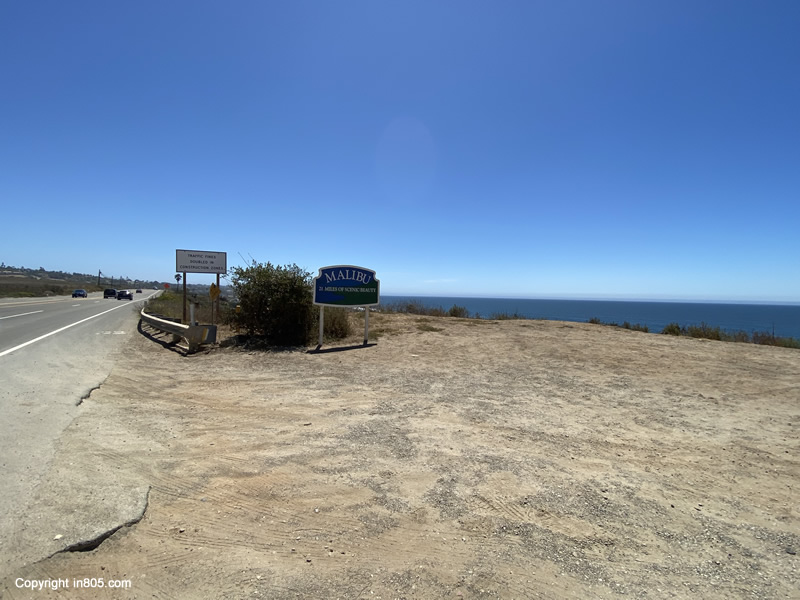